African Online Information Systems (PTY) Ltd. (AOSIS) is a South African private company (PTY) registered under the number 2002/002017/07. AOSIS is an Open Access publisher with a portfolio of 39 journals as of July 21st, 2018. The journals can be divided under three categories: Fully Sponsored, Partially Sponsored and Non-Sponsored. The partially sponsored journals are interesting for several reasons: 1) unique transparency in explaining that the journals are “sponsored until the money runs out”, a model that creates some uncertainty for authors as to whether they need to pay or not, and how much; 2) differential pricing for members of society sponsors (support for the society as well as OA publishing); 3) and the use of per-page rather than per-article charges. These complexities result in differential pricing for articles for good underlying reasons (sponsorship and its limitations, societies’ needs to provide benefits to members, the variation in work that goes with differences in article length).

AOSIS is using Article Processing Charges by Page (APPC) method for publication in its journals. The APPC varies from a journal to another. Partially sponsored journals receive limited funds from organizations to cover partially the APPC during a calendar year. Authors publishing in partially sponsored journals are responsible for payment of the difference between the APPC full amount and the sponsor’s contribution per page. If the funds allocated by the sponsor for APPC are used before the end of calendar year, authors would have to cover the full APPC. In the case of the Journal of Transport and Supply Chain Management, APPC is listed as R1002.00/page (R = South African Rand, currency code: ZAR) equivalent to USD 76.00/page (Exchange rate Aug. 1, 18 at https://www.xe.com/) while the sponsor contribution is R398.00/page ($30.00) which leaves the author with the responsibility to cover the payment of the difference (R604/page) ($46.00).

The South African Journal of Communication Disorders applies, however, different APPC method: the first author receives full subsidies for APPC if he is a paid member in the South African Speech-Language-Hearing Association (SASLAH), while the second author receive 50% subsidies of APPC. If the author is not a member of SASLHA he would have to pay the full APPC. The subsidy for APCs is valid until the limit of the annual SASLHA sponsorship has been reached. Author wishing to publish after the funds are completely used would have the cover the full APPC.

Springer Nature was formed in 2015 through the merger of Nature Publishing Group, Palgrave Macmillan, Macmillan Education and Springer Science+Business Media. The company is a leading global research, educational and professional publisher. It describes itself as “the publisher of the world’s most influential journals and a pioneer in the field of open research”. It claims to have over 3000 journals and 7 million articles.

Analysis of 2017 open access journals does not reveals major changes in reported APC, except for Nature Research open access journals where 22 journals saw reduction in APC and one reported an increase. Average APC at Nature Research was $3103.00 a decrease of 11% from 2016. BioMed central APC increased on 4 journals and decreased on two journals, with average APC of $2189.00. Springer Open APC saw an increase on 8 journals and decrease on one journal with average APC stand at $1301.00

The chart below shows a sample of the journals that were compared.

The 2017 journals APCs were compared with the 2016 list consisting of 306 journals. APCs were posted in US Dollar, British Pound and European EURO. Our comparison is based on the posted US Dollar. 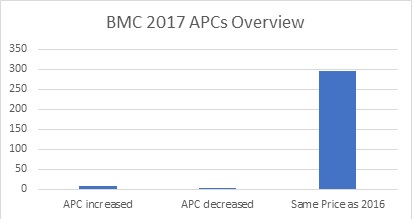 The chart below shows a sample of the BMC journals that were compared.

The 2017 posted APCs were compared with 2016 APCs. APCs were posted in three currencies; British Pound, US dollar and European Euro. We performed the analysis using the US dollar currency. 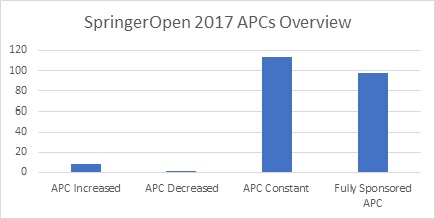